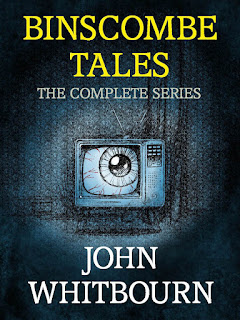 What's Christmas Eve without a ghost story? Well, here are two, both classics of the English New Weird by its foremost living exponent, John Whitbourn.

First "Waiting for a Bus". I heard this story in the mid-1980s when the author was one of several guests at a ghost story evening chez Morris. We had a nice dinner, a little fine wine, and settled down around the fire to entertain ourselves with some cosily spooky stories; an activity that mankind has only been doing for -- what? -- twenty thousand years and more.

Then John got up and produced the story he'd brought, the first (as it later turned out) of an ongoing series. As he read, a chill dark hand closed over the group. We were transported to a suburban street under dim street-lamps, hurrying past with just a nervous glance across the road at an ordinary but suddenly sinister bus shelter. With the final words, you could hear the sigh of long-held breath and we looked around at each other with that bright-eyed smile that says you know you've just had the bejasus scared out of you. Everyone that evening had come armed with a tale to tell, and there were talented, experienced writers there, to be sure, but there was no disputing who was the storytelling king of the fireside.

"Waiting for a Bus" not only gave a shudder to those dinner party guests who were privileged to hear it first, was picked as one of DAW's World's Best Fantasy Stories of the very next year. It has been widely anthologized since, as have other Binscombe Tales such as...

"Eyes" (also known as "It Has Been Said") which might put you in mind of a certain long-running horror movie franchise, but be aware that the story was originally published by the Haunted Library over a decade before the cameras started rolling on the first in that series.

But are these ghost stories, or something stranger still? This is Wrong; we don't deal in genre. Rest assured you'll get a delicious scare that's just the thing for the time of year. Happy Christmas!