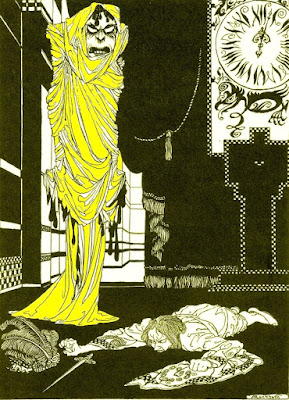 "Let the red dawn surmise
What we shall do,
When this blue starlight dies
And all is through."

The day following was a disastrous one for me. While moving a framed canvas from one easel to another my foot slipped on the polished floor, and I fell heavily on both wrists. They were so badly sprained that it was useless to attempt to hold a brush, and I was obliged to wander about the studio, glaring at unfinished drawings and sketches, until despair seized me and I sat down to smoke and twiddle my thumbs with rage. The rain blew against the windows and rattled on the roof of the church, driving me into a nervous fit with its interminable patter. Tessie sat sewing by the window, and every now and then raised her head and looked at me with such innocent compassion that I began to feel ashamed of my irritation and looked about for something to occupy me. I had read all the papers and all the books in the library, but for the sake of something to do I went to the bookcases and shoved them open with my elbow. I knew every volume by its colour and examined them all, passing slowly around the library and whistling to keep up my spirits. I was turning to go into the dining-room when my eye fell upon a book bound in serpent skin, standing in a corner of the top shelf of the last bookcase. I did not remember it, and from the floor could not decipher the pale lettering on the back, so I went to the smoking-room and called Tessie. She came in from the studio and climbed up to reach the book.
"What is it?" I asked.
"The King in Yellow."
I was dumfounded. Who had placed it there? How came it in my rooms? I had long ago decided that I should never open that book, and nothing on earth could have persuaded me to buy it. Fearful lest curiosity might tempt me to open it, I had never even looked at it in book-stores. If I ever had had any curiosity to read it, the awful tragedy of young Castaigne, whom I knew, prevented me from exploring its wicked pages. I had always refused to listen to any description of it, and indeed, nobody ever ventured to discuss the second part aloud, so I had absolutely no knowledge of what those leaves might reveal. I stared at the poisonous mottled binding as I would at a snake.
"Don't touch it, Tessie," I said; "come down."
Of course my admonition was enough to arouse her curiosity, and before I could prevent it she took the book and, laughing, danced off into the studio with it. I called to her, but she slipped away with a tormenting smile at my helpless hands, and I followed her with some impatience.
"Tessie!" I cried, entering the library, "listen, I am serious. Put that book away. I do not wish you to open it!" The library was empty. I went into both drawing-rooms, then into the bedrooms, laundry, kitchen, and finally returned to the library and began a systematic search. She had hidden herself so well that it was half-an-hour later when I discovered her crouching white and silent by the latticed window in the store-room above. At the first glance I saw she had been punished for her foolishness. The King in Yellow lay at her feet, but the book was open at the second part. I looked at Tessie and saw it was too late. She had opened The King in Yellow. Then I took her by the hand and led her into the studio. She seemed dazed, and when I told her to lie down on the sofa she obeyed me without a word. After a while she closed her eyes and her breathing became regular and deep, but I could not determine whether or not she slept. For a long while I sat silently beside her, but she neither stirred nor spoke, and at last I rose, and, entering the unused store-room, took the book in my least injured hand. It seemed heavy as lead, but I carried it into the studio again, and sitting down on the rug beside the sofa, opened it and read it through from beginning to end.
When, faint with excess of my emotions, I dropped the volume and leaned wearily back against the sofa, Tessie opened her eyes and looked at me....

We had been speaking for some time in a dull monotonous strain before I realized that we were discussing The King in Yellow. Oh the sin of writing such words,—words which are clear as crystal, limpid and musical as bubbling springs, words which sparkle and glow like the poisoned diamonds of the Medicis! Oh the wickedness, the hopeless damnation of a soul who could fascinate and paralyze human creatures with such words,—words understood by the ignorant and wise alike, words which are more precious than jewels, more soothing than music, more awful than death!
We talked on, unmindful of the gathering shadows, and she was begging me to throw away the clasp of black onyx quaintly inlaid with what we now knew to be the Yellow Sign. I never shall know why I refused, though even at this hour, here in my bedroom as I write this confession, I should be glad to know what it was that prevented me from tearing the Yellow Sign from my breast and casting it into the fire. I am sure I wished to do so, and yet Tessie pleaded with me in vain. Night fell and the hours dragged on, but still we murmured to each other of the King and the Pallid Mask, and midnight sounded from the misty spires in the fog-wrapped city. We spoke of Hastur and of Cassilda, while outside the fog rolled against the blank window-panes as the cloud waves roll and break on the shores of Hali.
The house was very silent now, and not a sound came up from the misty streets. Tessie lay among the cushions, her face a grey blot in the gloom, but her hands were clasped in mine, and I knew that she knew and read my thoughts as I read hers, for we had understood the mystery of the Hyades and the Phantom of Truth was laid. Then as we answered each other, swiftly, silently, thought on thought, the shadows stirred in the gloom about us, and far in the distant streets we heard a sound. Nearer and nearer it came, the dull crunching of wheels, nearer and yet nearer, and now, outside before the door it ceased, and I dragged myself to the window and saw a black-plumed hearse. The gate below opened and shut, and I crept shaking to my door and bolted it, but I knew no bolts, no locks, could keep that creature out who was coming for the Yellow Sign. And now I heard him moving very softly along the hall. Now he was at the door, and the bolts rotted at his touch. Now he had entered. With eyes starting from my head I peered into the darkness, but when he came into the room I did not see him. It was only when I felt him envelope me in his cold soft grasp that I cried out and struggled with deadly fury, but my hands were useless and he tore the onyx clasp from my coat and struck me full in the face. Then, as I fell, I heard Tessie's soft cry and her spirit fled: and even while falling I longed to follow her, for I knew that the King in Yellow had opened his tattered mantle and there was only God to cry to now.
I could tell more, but I cannot see what help it will be to the world. As for me, I am past human help or hope. As I lie here, writing, careless even whether or not I die before I finish, I can see the doctor gathering up his powders and phials with a vague gesture to the good priest beside me, which I understand.
They will be very curious to know the tragedy—they of the outside world who write books and print millions of newspapers, but I shall write no more, and the father confessor will seal my last words with the seal of sanctity when his holy office is done. They of the outside world may send their creatures into wrecked homes and death-smitten firesides, and their newspapers will batten on blood and tears, but with me their spies must halt before the confessional. They know that Tessie is dead and that I am dying. They know how the people in the house, aroused by an infernal scream, rushed into my room and found one living and two dead, but they do not know what I shall tell them now; they do not know that the doctor said as he pointed to a horrible decomposed heap on the floor—the livid corpse of the watchman from the church: "I have no theory, no explanation. That man must have been dead for months!"

I think I am dying. I wish the priest would—
Posted by Dave Morris at 08:25